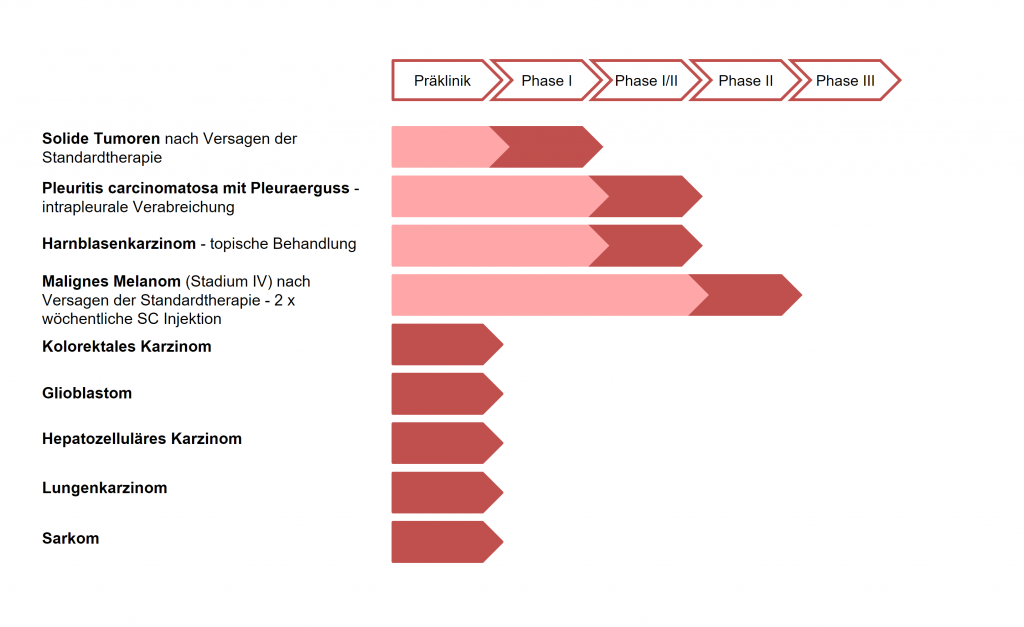 About half of the drugs approved for medical therapy in the last two decades have been derivatives of natural substances. Focused on oncology the proportion is even higher: 74% of all drugs against tumors are of natural origin and derived out of natural molecules or are inspired by them. Some examples are: Vinca alkaloids, taxanes, drugs acting on DNA topoisomerases, cytokines, and different enzymes.

MELEMA will take up that development tradition by focussing on natural molecules with positive effects upon the immune system. MELEMA starts its development with molecules or are inspired of them. Examples include Vinca alkaloids, taxanes, topoisomerase inhibitors, cytokines, and various enzymes. MELEMA builds on this development tradition by focusing on derivatives of natural substances with a strong influence on the immune system. E.g., works on MELEMA ME-503.

Lectins are glycoproteins that bind with high specificity to sugar molecules that, e.g. located on the surface of cells. ME-503 is a dimeric protein, one domain, the so-called B chain, binds to the surface of a target cell, while the other, the so-called A chain, is highly cytotoxic thanks to its enzymatic activity as 28S rRNA-N-glycosidase is.

ME-503 binds to specific receptor

ME-503 is an entirely new kind of biologicals. It is the only recombinant sialic acid-specific lectin in drug development that targets the specific α2,6-sialo-N-acetyllactosamine (CD75) and α2,6- sialo-N-acetylgalactosamine (sTn) both terminally bound to proteins and lipids of cell surfaces.

The binding here takes place via the ME-503-B chain, which triggers holoprotein endocytosis. The mechanism is reminiscent of the famous Trojan horse: As soon as ME-503 has been taken up by the cell, its A chain begins to modify ribosomal RNA (activity as a so-called type 2 ribosome-inactivating protein RIP). 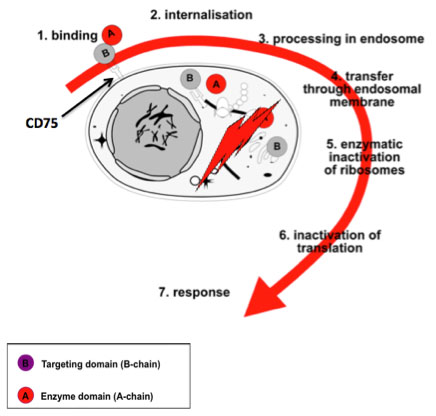 This change leads to a complete and irreversible interruption of protein synthesis in the cell (inactivation of translation). This sudden stop of vital processes leads to an intense stress reaction (“ribotoxic stress”) of the cell, which in turn leads to phosphorylation of essential kinases and the initiation of programmed cell death, the so-called apoptosis.

Blocking protein production by inactivating the ribosomes is a cytotoxic mechanism that is only known by very few substances such as the ME-503. Most other cytotoxic agents either damage the DNA or react with the mRNA.

These glycan epitopes are overexpressed on many cells due to enhanced α2,6-sialyltransferase (ST6Gal I, ST6GalNAc) activity. These can be different tumor cells as well as certain immune cells (B cells, dendritic cells, regulatory T cells). The primary event is, therefore, cell death triggered by ME-503. In the case of immune cells, an immune cascade (immune stimulation at various levels) is set in motion, which is directed against cancer cells. (see Video)

ME-503 is, therefore, a new active ingredient with cytolytic/cytostatic and immunotherapeutic activity. It can be used for direct intratumoral and subcutaneous injection.

Two examples from experimental research confirm this: The intratumoral injection of ME-503 reduces the injected lesions in a colon carcinoma model and causes there partial lysis – a principle similar to that of intratumoral administration of chemotherapy drugs or oncolytic viruses. Subcutaneous injection of ME-503 strongly stimulates CD4 + and CD8 + T cells, which recognize tumor antigens, infiltrate and kill the tumors. By this, e.g., in mice with lymphosarcoma, tumor growth is inhibited, and overall survival improved.

ME-503 has been administered to more than 130 patients in various clinical trials in phases I, I / II, and II using different application routes and with varying dosages, and has proven to be safe and well-tolerated. Also, a good response in solid tumors (stabilization of tumor growth) and thus a significant clinical benefit in both s.c. and local applications. In a phase II study in patients with metastatic skin cancer (melanoma), clear indications of effectiveness in terms of a possible improvement in survival time were obtained (Treffzer et al. 2014).

Sorry, this entry is only available in German.